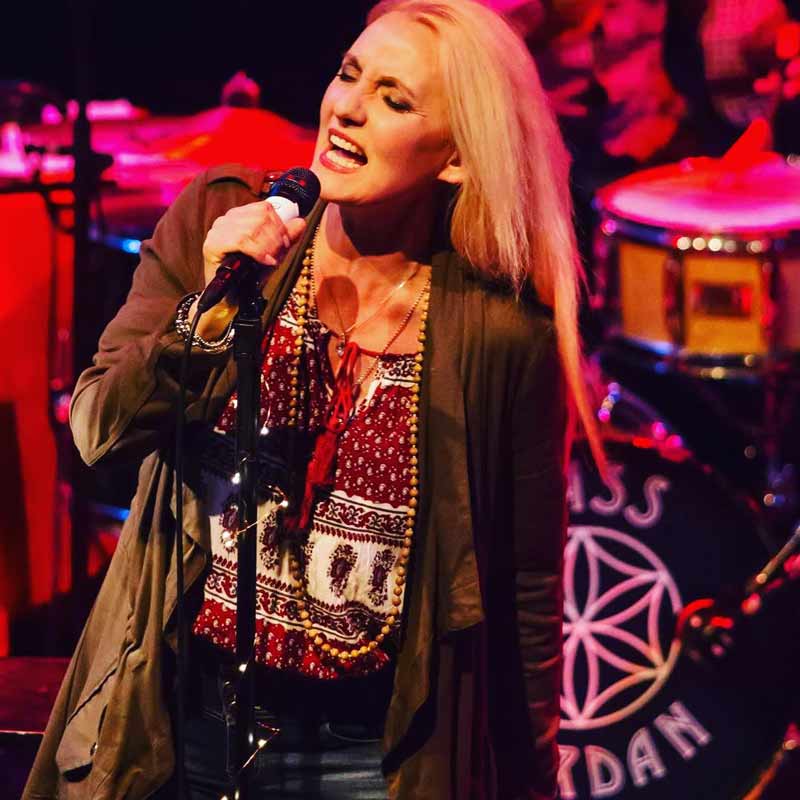 I was born in England, but I grew up in Montreal, Quebec. I traveled the world quite a bit as a kid, and realized that the reason I came to Earth was to inspire and light up my fellow humans through expressing my own light, be it through writing, singing or talking. I also realized early on that nothing of great value to the human race is accomplished solo – rather, the real difference is made through community, which is a larger form of family, and you can create community anywhere. I chose to do it through music and writing, and I have had a wonderful time so far. My main interests in life are to have fun, to enjoy, to laugh and to share that joy with anyone and everyone who crosses my path!

You are a Canadian Rock Icon. Everyone knows your name and it’s a fabulous name! Sass! Were you named Sass? I want to have that name.

First of all, you are welcome to my name, but I have to warn you, it rhymes with ….. ! Sass is the nickname I have had all my life, and I’ve never been called anything else, except when things are unpleasant. I actually have met other people with the name Sass.

You have performed with many big names in the industry, you did a duet with Joe Cocker for the movie, “The Body Guard”, you played Janis Joplin in the off Broadway hit, Love, Janis and you were a judge on Canadian Idol for the show’s entire run. You’ve had hits and reached the pinnacle of most people’s dreams in music, television and stage, what’s the one thing you have not done that you are planning to conquer next?

There is no ONE thing, sadly – it would be a lot easier if there was just one! I am thoroughly and completely excited and inspired by people who are passionate about whatever they are doing, especially as it relates to serving the rest of us, in the worlds of energy and light medicine, new methods of agriculture, science and tech, art – well, pretty much anything that moves us forward in a non-harmful, life affirming way.

Best thing about being a rock star?

Getting to create and work with people I admire, and having a platform from which to share with other people things that I think are amazing or helpful.

Worst thing about being a rock star?

Having to perform when you’re sick or feeling crappy

You and your family are very close. Your husband Derek Sharp is the lead singer of The Guess Who, how do you balance being on the road with family time?

Well, the kids are adults now, (I have a step-daughter as well as my daughter) so it’s not that difficult – now I have to take care of ’the furs’, so we always have to find someone to look after them if we are gone at the same time.

You and your daughter are very close. What’s your secret to being a high profile artist on the road and having this incredibly solid relationship with your daughter?

There is no secret – it’s just our personalities. My daughter never knew any different, because I had to work from pretty much 3 months after she was born, which meant leaving her for weeks at a time. She appears to have dealt with it very well. I think children adapt to whatever they are exposed to, and as long as we as parents do not feel guilty or worried, the kids just accept things as they are. I am not a fan of the ‘helicopter parenting’ that is so prevelant in our society these days. I think it is very harmful to children, and does not produce people that are able to stand on their own two feet with dignity and grace.

You were made an Honorary Colonel for 417 Combat Support Squadron Cold Lake, AB How cool was that experience?

It was extraordinary for me, and very weird, as I had never in my life experienced ANYTHING like a military environment. It is extremely disciplined and formal, and goes against everything in my own experience – but it was a tremendous honor and a privilege to be around a lot of those folks who do so much for this country. Boy, we did some laughing, too, which is my favorite thing.

Impossible to choose just one, but I am a HUGE fan of Utrecht in the Netherlands, Paris France, Montreal Canada, New York, Nashville, New Orleans, and the island of Kauai doesn’t suck!

Oh much, MUCH stronger!

I love walking …. you see more and experience reality at a pace that makes sense for a human being.

Who is the one person in the world you would like to sit beside on a long flight and what would you ask her or him? (Or maybe you already did and have a happy story….)

There is no ONE person … I am fascinated by ANYONE who has passion and joy and interest in whatever they are doing!

What advice would you give people interested in pursueing a life in the music industry?

You’ll have to figure it out on your own, as there is no one way of doing things, and as soon as there is, it will change. I would say the same thing to anyone interested in pursuing a happy life … Retain a massive sense of humor, realize that things that go wrong are usually blessings in disguise, and if it doesn’t flow … don’t go.

I am inspired and thrilled by people who are passionate about what they do – so there is no ONE cause, group or activist that I would call ‘favorite’. As long as I consider whatever it is to be bringing positive energy to the Planet, I am pretty open to the way it is done!

Feel free to add your favourite fragrance by The 7 Virtues if you like. Gush.

My favorite fragrance by The 7 Virtues is Noble Rose of Afghanistan. It has a sophistication and softness that I love. It starts out straight in your face with a veritable cascade of glorious summer garden roses, and then the dry down creates a seductive aura of mystery and collusion. If I could use a film to describe the atmosphere it creates, it would be the sci fi thriller ‘Minority Report’ starring Tom Cruise. The musical equivalent would be anything by Sade. I absolutely love it! I bathe in tubs filled with it … HAHAHA I wish!